Serpents Oath have just released a new track via Decibel Magazine. "Leviathan Speaks" is the second single from the bands forthcoming debut album Nihil due out December 4th.

From Decibel: “Leviathan Speaks is a strong indicator of what to expect from the album: sharp and cold riffs, constant blast beats, throat-shredding vocals and a sense of detachment from anything except the music."

SERPENTS OATH is a new creature comprised of three adepts of Belgium’s extreme metal scene. As soon as they met up and started creating together, they realized they were establishing a very different entity. Hence they decided to leave the past behind and give birth to this new Beast. 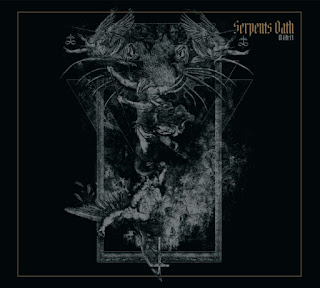 Their rebellious debut album Nihil is set to take the world by storm with its relentless and unforgiving version of nihilistic black metal. Expect no remorse from this opus, only crushing riffs, pounding drums and terrorizing screams pushing the limits of a music genre already marked by chaos and death.

11. The Swords of Night and Day

Posted by Artemortifica at 12:50 PM