Hello my wonderful readers, check out the latest news for the band Forged In Black

UK Heavy Metal act FORGED IN BLACK, have just inked a deal with Fighter Records for the worldwide release of their upcoming 2nd album "Descent of the Serpent", scheduled for 5th of March 2019. 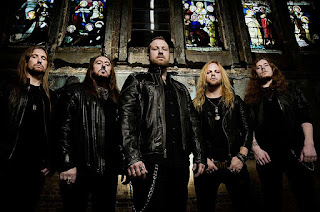 FORGED IN BLACK was born in 2013 after changing their monicker from MERCILESS FAIL (2007-2013). Their debut album "Forged in Black" was released that same year, being followed by three EP's: "The Tide" (2013), "Fear Reflecting Fear" (2016) and " Sinner Sanctorum" (2017). These releases got a great acceptation within the british Heavy Metal scene and paved the way for their 2nd full length album "Descent of the Serpent", recorded in 2018, again with producer Romesh Dodangoda, with cover art made by Dan Goldsworthy (ALESTORM, HELL, ACCEPT, etc.).

The style of FORGED IN BLACK is a fresh, melodic and powerful Heavy Metal where you can find classic elements from british bands like IRON MAIDEN, JUDAS PRIEST or ANGEL WITCH, with a slight dose of CANDLEMASS and hints of Thrash in the vein of bands like FLOTSAM & JETSAM, HEATHEN, METAL CHURCH... You gotta listen by yourself!!

This is what FORGED IN BLACK said about their signing to Fighter Records: “We are absolutely thrilled at the prospect of working with Fighter Records. To be added to their already stellar roster is overwhelming and we cannot wait to see what this partnership brings. This album is the culmination of 10 years of hard work and we are certain that this release has something to love for all Metal fans. We are currently working on a host of shows to support the release and can't wait to display our most ambitious live performance to date. See you down the front!”.

Tracklist for "Descent of the Serpent" is as follows:

1. Seek No Evil
2. One in the Chamber
3. Shadowcasters
4. Descent of the Serpent
5. One Last Sign
6. Palm of Silver
7. Aphelion Tormentor
8. Vendetta
9. When Hell is Done

International release date for FORGED IN BLACK's"Descent of the Serpent" will be 5th of March 2019 through Fighter Records on CD format. In the meantime, check out FORGED IN BLACK's official Facebook site here: facebook.com/forgedinblacks