Blastfest Release Festival Schedule
Loyalties will be tested. No matter what festival line-up you look at you will probably run into a few clashes on the day between a few bands you want to check out. It's the nature of the beast.

Blastfest organisers have now released their festival schedule so you can now plan your weekend. Check out the schedule below. 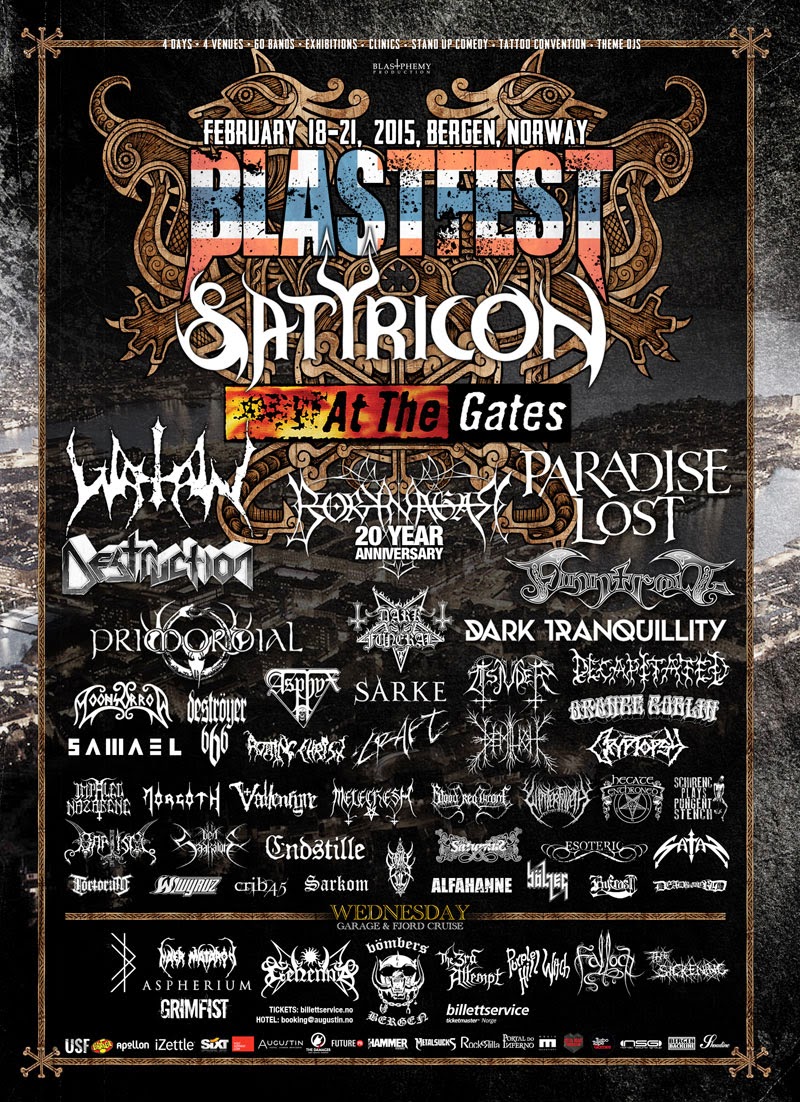 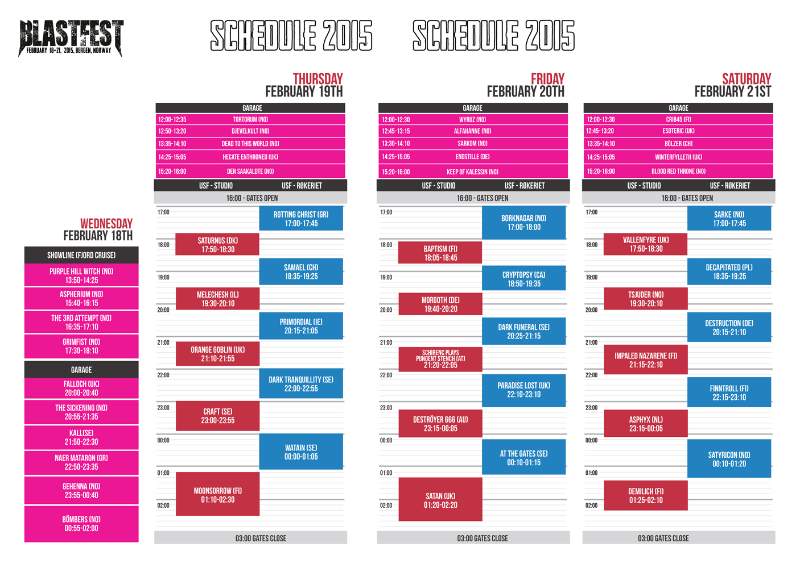 As well as that the festival have released more information...

BlastInk - Tattoo Convention
There will be a tattoo convention held in the main festival venue, USF from February 19th - 21st every day from 5pm to 11pm. Artists at work will include Line Hammett, Carlos Aguilar, Don Fatt, Trine Grimm and Leading Light Tattoo. 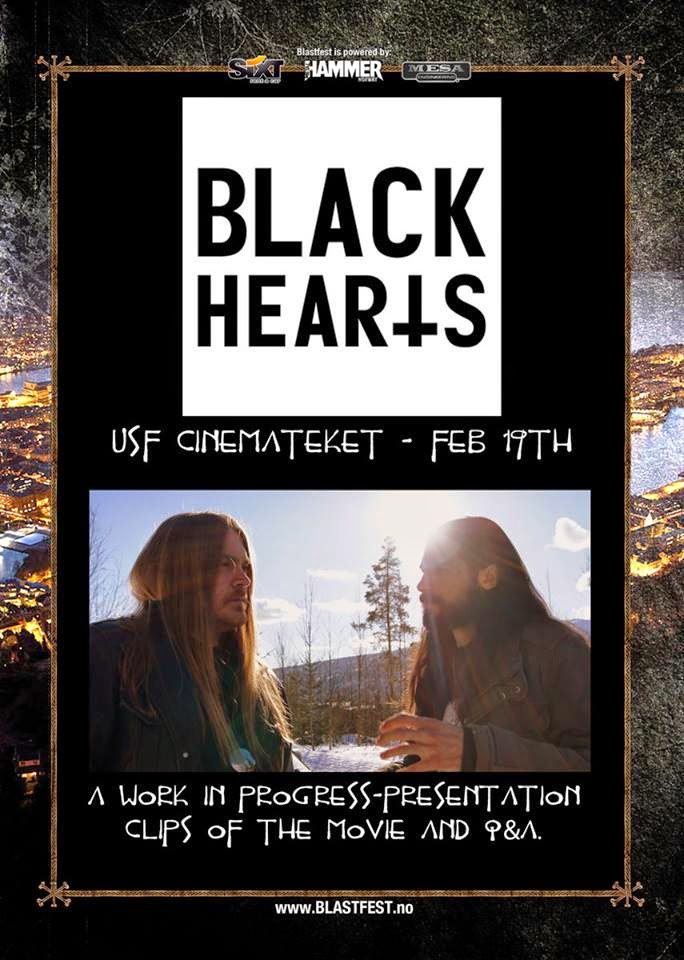 Blastfest is proud to offer an exclusive prescreening of a brand new documentary. A surprising look at the people beneath the corpse paint – from Tehran and Athens to Bogotá and finally... Norway.

25 years ago, black metal music was born on a dark stage in Norway. The genre won fast popularity for its controversial connection to a series of murders, suicides, church burnings, and supposedly Satanic acts.

Blackhearts dives right into the scene’s dark underbelly - but from a very  unexpected angle. No one has witnessed the black metal scene quite like this. The film takes you to South America, Europe and Iran on a journey into the minds, hearts and personal lives of three black metal diehards from different cultural, religious  and political backgrounds. It shows how the genre has taken root in their countries and explores just how far they  are willing to go – risking alienation, and even death – to play black metal and live by its  ideology.

The makers elaborate and provide a little insight to some the individuals exposed in the documentary, "In Iran we meet Sina, the Islamic country’s only black metal artist. He faces severe punishment – life in jail, or even death – if caught breaking Iran’s strict Sharia law by playing the blasphemous western music. But he’s been doing it for over 15 years."

"Hector is a practicing Satanist in a country that’s 90% Catholic. We go deep into his life  of ritual and Beast worship in Colombia – and watch as he raises his teenage son to be just like him, living a life of social alienation and poverty."

"Giorgos Germenis (commonly known as Kaiadas from the band Naer Mataron) holds a position in Greek parliament as lawmaker for right-wing extremist party, Golden Dawn. In 'Blackhearts' we meet him and his band as they fight to keep their passion for the band alive with the always changing climate of Greek politics."

"Blackhearts takes you right into the heart of it all, as you watch wide-eyed at the unfolding of events, and both laugh and cringe at the things people say and do and believe – all in the name of black metal." 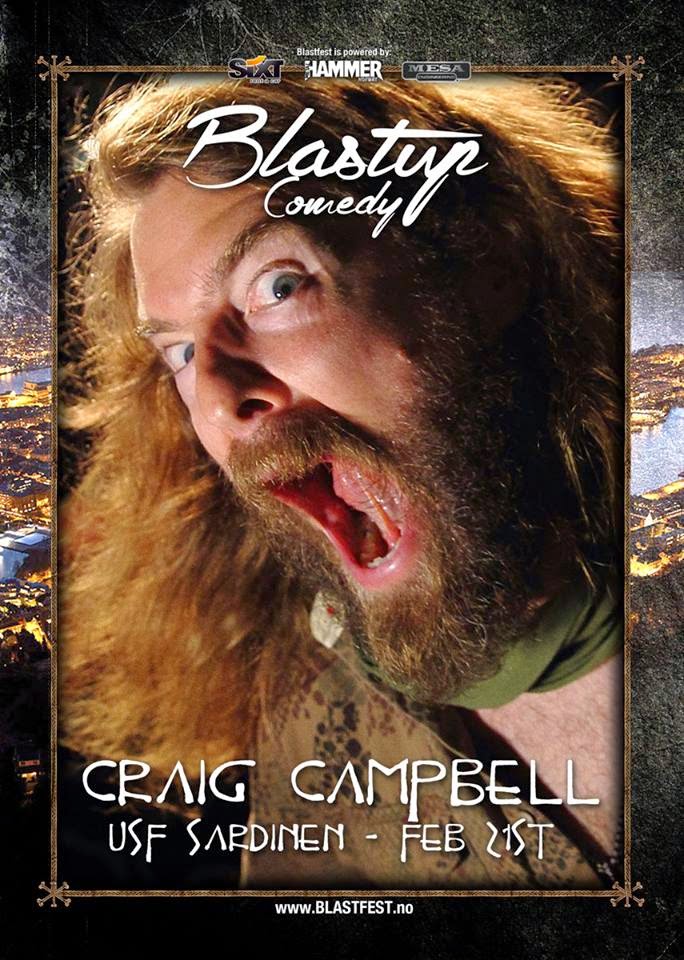 Craig Campbell is a formidable stand-up, one of the most charismatic and inventive performers around. He has made appearances on Michael McIntyre's Comedy Roadshow, Russell Howard's Good News!, Alan Davies: As Yet Untitled and Dave's One Night Stand. Once the notorious host of Canada’s legendary Ed & Red's Night Party, Craig has appeared as a featured guest live with Jim Carrey and on 'Mountain Madness' with Dennis Miller as well as starring on 'Just For Laughs' and in an episode of his own CBC 'Comics', as a special note Craig was lucky enough to be introduced by John Candy at his first ever appearance at the Just for Laughs festival. Since relocating to the new home he loves in Devon UK, Craig has appeared as presenter of Sky One’s hit series From Wimps to Warriors, recorded Comedy Cuts (ITV2), Mitch Benn's Musical Comedy Show (BBC Radio 4), Out To Lunch (BBC Radio 2), Comedy Shuffle (BBC Three), Comedy Blue and Edinburgh and Beyond, both for the Paramount Comedy Channel. 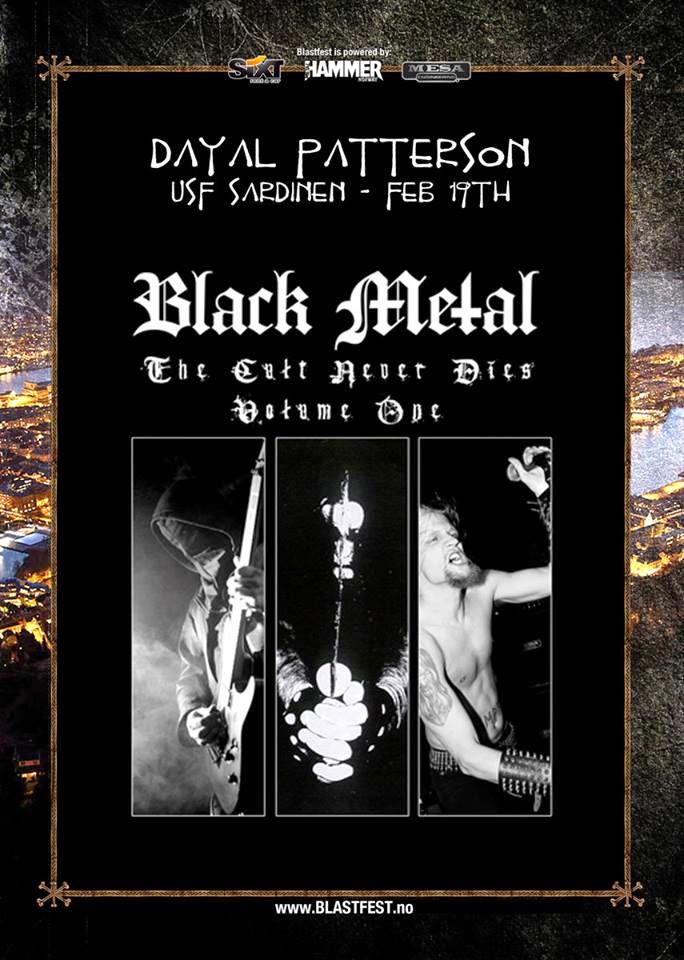 Author and respected metal journalist Dayal Patterson is back at Blastfest! At Blastfest 2014, Dayal Patterson launched his first book, Black Metal: Evolution Of The Cult, an intimate and detailed look at the birth and development of the black metal genre through the voices of the people who made it happen.

In 2015 Dayal Patterson and Cult Never Dies present Black Metal: The Cult Never Dies Volume One, the first of a series of books examining in greater depth this worldwide phenomenon. Comprised entirely of exclusive interviews, many with artists who have never spoken about their careers before, and images – many previously unpublished - this tome begins the project by examining three facets of the genre in detail, returning to the subject of Norwegian Black Metal, discussing Polish Black Metal and telling the story of the subgenre of Depressive/Suicidal Black Metal.

While the official release of the book is not until the 31st March 2015, Dayal will be bringing a small consignment of copies with him to the mighty Blastfest in Bergen and taking part in a signing session there. 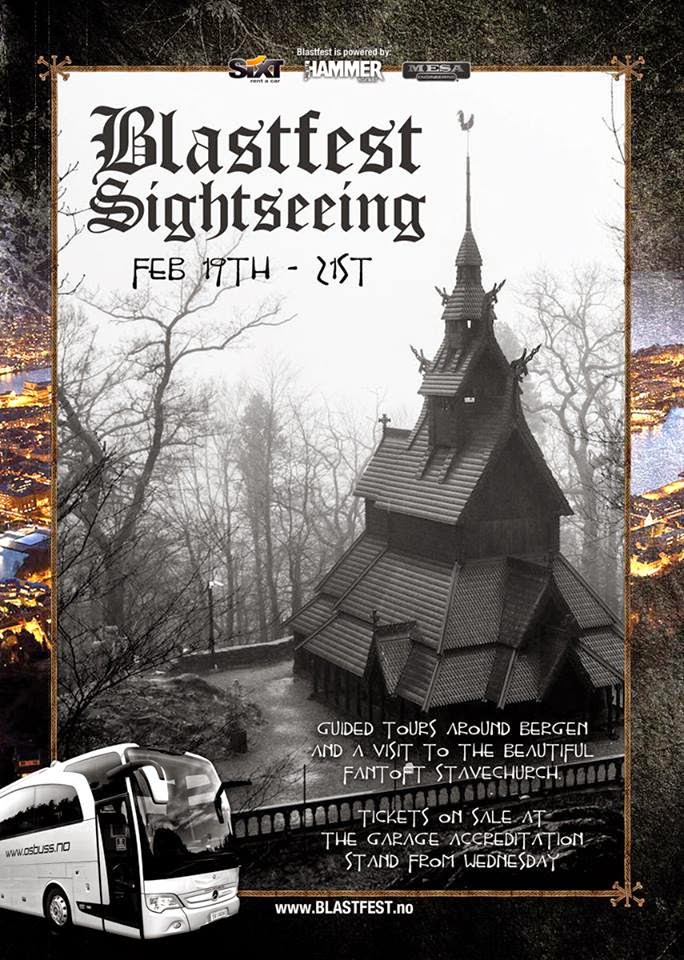 With over 60% of the Blastfest ticket holders travelling from outside Norway organisers have decided to make the Blastfest experience even more simple. February 19th - 21st there will be guided (English) sightseeing tours going to Fantoft Stavechurch and around the town to give you a great complete experience of Bergen!

Tickets for the sightseeing will be on sale in accreditation at Garage Bergen from Wednesday 18th February.

Posted by Artemortifica at 7:32 PM