Indy-based death metal outfit OBSCENE are rapidly becoming a force to be reckoned with. After self-releasing their debut EP, Sermon to the Snake, in late 2017 on limited-edition cassette, OBSCENE teamed with Horror Pain Gore Death Productions to release the EP as a digital download. 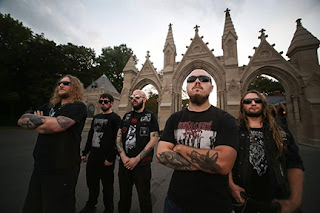 Purchase the digital edition of Sermon to the Snake at bandcamp.com-sermon-to-the-snake.

OBSCENE is gearing up for a string of live dates in support of Sermon to the Snake. Confirmed dates as follows:

Posted by Artemortifica at 12:44 PM