Formed in Disgust album to be released on Comatose Music March 4th 2016. Heavy and crushing are the immediate thoughts. I ended up listening to this album to and from work. It definitely helped me de-stress on a day to day basis. This is like a giant slab of cement smacking you in the face. The furious charge spewing forward cannot be contained. The album is very potent and menacing force. Low tuned strings, guttural vocals, slamming bass lines and erupting drums seizes the mind and obliterate any hope of getting out alive. The opening song sample is that of earth dying and people are at their end, sounds interesting. Once the first track begins you know this is a mosh worthy phenom. I am reminded of bands like Devourment, Defeated Sanity and Cryptopsy. Complex riffing with super heavy tones assaulting the senses.

Final thoughts, an abrasive punishing experience that will leave you speechless. High levels of brutality are delivered and you will not be disappointed.
~Artemortifica 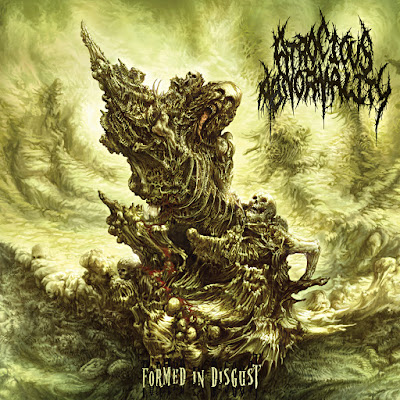 Posted by Artemortifica at 4:19 PM