Murder Made God is a four piece band made up of, Vocals-George. Guitars-Dennis. Bass-Stelios. Drums-Tolis. Music style is listed as, tech death metal. Band location, Thessaloniki,Greece.

Enslaved album to be released on April 15th 2016 Comatose Music. Upon hitting the play button a vicious attack of pure and unforgiving intensity is quickly delivered and my face is melted. No time is wasted as the music unfolds. With no restraints it batters its unsuspecting listeners. All the characteristics of extreme metal are explore. Some influences that can be noted would be bands like, Vader, Krisium, Suffocation and Morbid Angel. A very good production and heavy performance is captured.

With this release the band offers us ten powerful songs of devastating nature. The title track is one of my favorites. Intense double kicks and demonic vocals. "Titan", is another big contender with high levels of aggression unfolding, is hard to resist the madness.

In conclusion, if you want technical, progressive, extreme metal with a distinct sharp edge, then look no further, this album is for you.
~Artemortifica 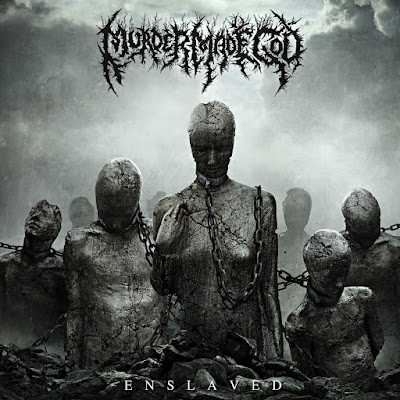 Posted by Artemortifica at 7:33 PM