Nepente - Suffering is The Seed

An interesting beginning on the first track, rolling toms and double kicks. Gritty and raw guitars. Nepente comes to us from Colombia, they are Death/Thrash/Black metal. The band formed in 2002 and have two releases on Metabolic records "Atonements" and "Ascensions". The cover to the album is very ambitious and brutal true to the music being projected here. This is a hard working band with many performances under their belts. "Hell is the name of this Land" is very impressive, I hear the black metal coming through on this track, excellent brutality, the drums are intense and determined, reminds me of The Abyss at times which is good, the high and low vocals are done very well. "Merciful Death" has a very cool intro, it had me headbanging right from the start. "Hear me Howl" a composition with many powerful overtures an instant favorite for this album. "Slaves will always be Slaves" rolling kicks military like stomp followed by intense high vocals. "This Shroud is Yours" this has low and guttural vocals on it which is fitting with the riffs involved. The chorus on this is very catchy and will easily be remembered for years to come. The album concludes with "The Swamp" killer song the main riff is fast and furious true to speed/black metal style yet another track I will be spinning for a long time. My only complain is that there were hardly any solos to be heard which is not completely necessary but since I am a lead guitar player I look to hear solos in songs. Overall its an incredible album and I highly recommend it.
~Artemortifica 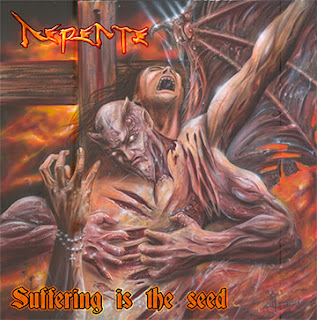 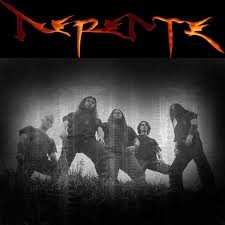 Posted by Artemortifica at 10:55 PM