Welcome, Miguel Goregrinder of Chicago Domination Fest. Give us a
short summary of where CDF began?

It began just a couple of short years ago but, its origins go back to another festival I use to run called Chicago Metal Devastation that ran from 2005 to 2007. It was more of a local, smaller festival that had bigger plans and just never really got traction. I stepped away for a couple years from the fest scene to think things over and figure out what you really wanted to do with this whole thing. Then, I was sitting around working out a festival flyer that was meant to be a complete joke, I put on all these ridiculous bands, kind of a dream line up if you will and from there I put it up on Facebook and it got ridiculous reaction to the whole thing which blew me away. I seriously considered giving fest thing another try, so the first year, I wanted to put together something small, but still going to make a big impact. That's how CDF one began. I went out and found myself really bad ass bands and that's been the whole mythos behind this thing, all about quality over quantity.

What is the biggest challenge of putting on a fest of this magnitude?

There's crazy amount of planning that goes into this whole thing, usually a process
that can take literally a whole year. There's a lot of things to consider, financially, you know you have a certain budget that you have to stay within to ensure that you don't get yourself into any unnecessary issues, one of them is not being able to cover the festival end of things with ticket sales, that's the concern obviously as much as I want to take this to the next level and really grow it out and just make it as big as it possibly can be, there are certain limitations that I have to work within to really keep it grounded and still make it fun for everybody.

What was the highlight of last year's event?

Well for me, personally the biggest highlight was not necessarily the show itself but more the metal family atmosphere that really came together at that show, I mean there were people from all over the world that came up to see this festival and to me that was the biggest gratitude that I can ask for is to have hundreds of people there that I
knew in some way, shape or form and everybody's just having a great time.

Named some of the colleagues, sponsors or vendors for this year's festivities?

My main partner in the festival his name is Jesse Denton. He has been working with me since last year and he is bringing different flavor to the table as far a bands. When it comes to the amount of work that the gets put up by me, so he helps out a lot with the day-to-day stuff and getting us out to a wider audience. As far as the actual sponsors and things like
that, we have Two Brothers Brewing coming back to this year, (nice! I remember them from last year) yeah you know that I'm not really sure to what extent they're going to be involved to be honest but, last year they provided a whole bunch of free beer for
the bands (so, the beer will be flowing for sure, haha!) sure and then of course we got the
cruelty cabinets going to be one of our main sponsors once again they're going
to be providing all the basic guitar cabinets for all bands to use throughout the festival.
We are looking forward to getting some more sponsors on board eventually, you but it's going to be a step-by-step process to eventually get there.

How have the fans responded to this venue, (The Wire) compared to the previous locations?

Nothing but great things, everybody that got a chance to talk to, during
the fest last year was blown away by the professionalism of The Wire, everything
ran smooth. The staff that was there handled it with their A game.
They were just on top of it. When it comes to festivals like this, you usually you don't get that kind of treatment that this place provides.They're just really open and receptive
to everything which is really cool and I look forward to continue working with them.

To help some of the people out and people are traveling from many parts of the world do you know what kind of hotels and accommodations are around the area for these folks in case you're looking for places to stay?

Not many unfortunately, there's really not a whole lot in the way of hotels right in front of the venue but, about 10 minutes away from the venue,  there's a Best Western which  kind of became more or less the unofficial hotel for the festival last year, that's were all the parties were happening. I expect that to be the same thing this year. I'm going to try to work out some sort of deal with the hotel to see if we can get some discount rates for
festival attendees and band members. We will release information that as we get closer to
the actual show date. Definitely pay attention to the Chicago Domination Fest facebook page and event-page. As soon as we have the information available, will definitely put that out there for the fans.

What are the advantages of booking bands a year in advance?

The advantages are that it literally takes a whole year to plan this whole thing out. As I mentioned before, it is just impossible to think that you would be able to book a festival of this level with only a couple months time. It would be something that
would probably end in disaster, if you get it too soon so, especially
when you're dealing with international bands, you have to really plan things far in advance
to make sure that it works out the way that you hoped. Even then hickups are normal bands wlll cancel and other mishaps will happen, but that's just part of the effort involved.

I noticed you decided to expand the fest to three days instead of the usual two days, is there reason for that?

Its just all about growth, realistically at the end of the day I want to take this festival to
the biggest and baddest point and I can take it within my limitations. Will I ever consider going four days? probably not and that's just ridiculous. I think three day format is probably where it's at and where it will stay for the future if we decide to continue to do them from here forward.

Now at this time, where can people purchase tickets for the event?

Tickets aren't available yet, we plan to have them available probably in about a
month or so. Right around February. Once we have all that information, our Facebook page is the most up-to-date source of information for tickets. We also sell tickets through
our Chicago Domination Fest big cartel page. You can also order tickets by going to the venue's website as well.

What will the price of the tickets be? is there going to be a special?

There's a couple price points. There are single day tickets, for $35 per
day,  if for whatever reason you're coming out only on Thursday that's just a twenty-dollar ticket.  We're going to have two day passes available for sixty dollars and then on
the standard three day pass is going to run $80 and then we're going to have a VIP
package which was really popular last year and sold out. That will be $110 but it includes all three days of the festival, plus you get a gigantic poster flag, regular size poster
and the official first t-shirt and the laminate that allows you to go anywhere you want in the venue, so it's a really cool deal, a lot of people have been really receptive towards that package and I'm sure it's going to sell out again real quick this year.

One last question for the interview for you? are there plans for Chicago Domination Fest Five?

We will see, it's just one of those things that I can only take a year at a time you know, I mean, in my mind I'm going to say that I have plans, I got bands in mind for the next one because it's getting crazy. When you're working on this level, bands from all over the globe just want to come out and play because they hear all these great things about the fest. There's plans for the future, whether they actually ended up happening or not depends on the success of this year.

Thanks for taking time for the interview. 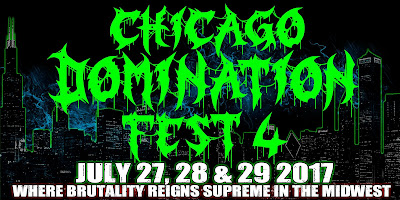 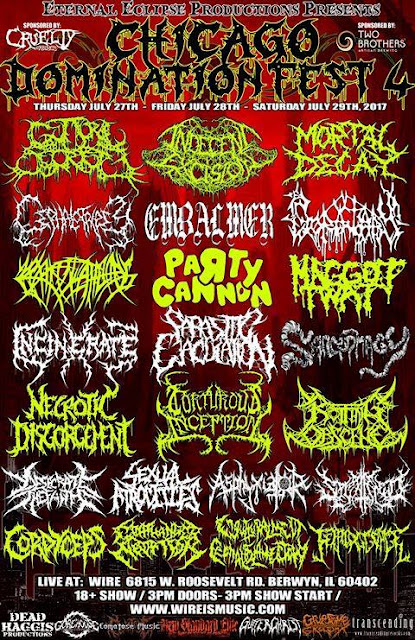 Posted by Artemortifica at 5:31 PM No comments: