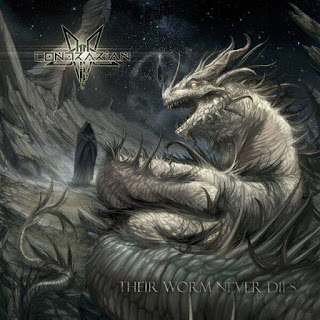 Listen to it at Heavyblogisheavy

A new school of old school death metal. Creating death metal that is authentically new while have a natural memory and understanding of the old. Rooted in early 90's progressive death metal, but with an unrelenting forward thinking approach, CONTRARIAN return with their third full-length release Their Worm Never Dies.

Spearheaded by guitar player Jim Tasikas, alongside George Kollias (Nile) simultaneously handling drum and vocal duties, CONTRARIAN is not a super group, but a unit of like-minded musicians that coincidentally converged on a vision of what a modern death metal band should sound like.

Organic sounding, yet aggressive and melodically complex, Their Worm Never Dies is packed with snake-like Schuldinerian-style riffage and atmospheric variations that will provide a wholly enticing listen to all those willing to take in its eccentricity.

The band previously released videos for "Exorcism" (video) and "My Curse" (Video).

"Progressive tech-death that bridges the divide between Death, Cynic, and new school manifestations Obscura and Beyond Creation."
- Decibel

"CONTRARIAN's sound pays homage to the Tech/Progressive Death Metal forefathers DEATH, ATHEIST, CYNIC. The musicianship is excellent, the compositions are tight, and you have to love the riffs."
- Metal Temple

"Listeners who appreciated Death's progressive era, and would prefer a little Cynic influence thrown in as well, should pick this one up."
- Metal Reviews

"This is progressive death metal at its finest."
- The Metal Channel

"If you have any sort of interest in old school prog death, Their Worm Never Dies needs to be on your radar. It captures the essence of the era and presents it in a modern light, and it represents a big step forward for Contrarian."
- Toilet ov Hell

"Contrarian is one of those few bands that can claim to take over the torch of Schuldiner and therefore Death."
- Chronicles in the Abyss

"An album that deserves to be listened to repeatedly and at high volume."
- Musipedia of Metal

"This one is everything the hype has made it out to be. This is a good one, readers."
- Twenty Red Metal Nails

"A gallery of great solos, a mixture of fluid styles and compositional quality."
- El Comenta Mierda

"If Schuldiner were still around, there's no question the sound Contrarian currently concoct is the route Death would've taken."
- Technical Music Review

"I encourage you to reach for Their Worm Never Dies, for all those who love what Death, Pestilence, Cynic and other similar bands do."
- Death Magnetic

1. Vaskania (The Evil Eye)
2. Exorcism
3. My Curse
4. The Petition
5. Among The Misled
6. Their Worm Never Dies
7. Whomsoever Worships the Whiteworm

#heavymetal #music #promo #bands #artemorbid
This post contains affiliate links which means if you buy from the links I will get a small commission which in turn helps me maintain this blog.
Posted by Artemortifica at 4:44 AM