Graveyard - The Altar of Sculpted Skulls

Death metal from Spain. I was not sure what to expect when I started listening to this, but its some really good DM happening here. The band formed 2007 and have several vinyls and cds released. The one I am reviewing here is their latest.

The Altar of Sculpted Skulls- released 2011 on Pulverised Records. The title track draws the listener in right away. Reminds me of Entombed or early Sepultura. The second "An Epitaph written in Blood" has an epic intro, I really enjoy this track and its my favorite from this CD. It truly captures the old school feeling, the kind that grabbed my attention as a kid. The guitars have a certain Dismember style sound to them which I love.
Next is "Deathcrowned" fast and furious from the start, there's a quick solo in there that sticks in my head, vocals remind me of Sepultura Schizophrenia album at times which is good. Call of The Shadows is an instrumental- its amazing, specially the solo, very well done. Ritual had me headbanging at the first riff. Very good track. The final track on this album is "Howl of the Black Death" not a strong as the rest of the tracks but holds true to the sound the band is capturing.

This band has lots of shows under their belts and very active in their scene in Spain. Hope they can make it to the states someday. You can check out their entire history at Graveyard official site
Go give the a LIKE on FB  Graveyard facebook 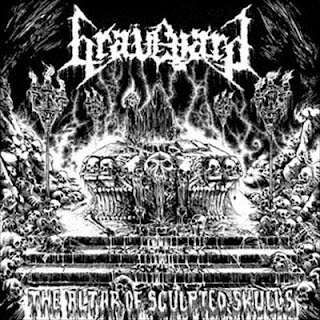 Posted by Artemortifica at 9:11 PM