The albums kicks off with an intro track that sounds like incantations right out of the necronomicon. The artwork on the cover is amazing, reminds me of Luis Rojo artwork, it grabs the attention from the moment you gaze upon it. Sometimes the artwork is more mind blowing than the music, but not here, the music is as captivating as the cover itself. The band is from North Rhine - Westphalia Germany. they are labeled as death metal but I hear a black metal influence in their style. A three piece band that formed in 2010. Their first release was in 2010, its a demo "Sulphur Plsams" and an EP in 2012 "Deep Deep down they Sleep". As I listened to this album I am reminded at times of early Behemoth and even Samael. The production is good, although at times the guitars are a bit over powering the drums. Monolithic is probably my favorite track on this album. "From the stars to the Sea" has some really good guitars going on as well as more incantations. Those who dwell in The Stellar Void -sounds a bit different as if recorded at a different time, sounds raw but still remaining true to the bands overall essence. The vocals are very good as he can achieve deep and guttural, mid range and highs without losing power. "Beneath,Below,Beyond,Above' is a brutal assault on the senses, the drums are very brutal on this track I find myself listening to it several times. Zombi has an eerie start, I fell in love with this track as soon as I heard the solos, really cool sound and a perfect way to end this album, definitely makes me look forward to their next release.
~Artemortifica. 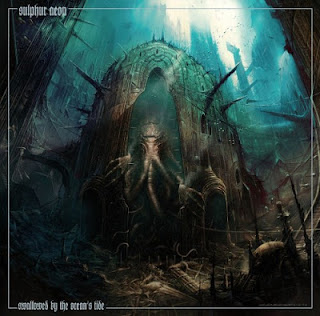 Posted by Artemortifica at 10:33 AM