This is a tour you don't want to miss. Beginning in March and going thru April, this intense package will hit many locations in Europe. Below is the release by XENOCORP Records and while your there why not check out the video by Skinned "Wings Of Virulence". Also check out XENOCORP store and pick up some awesome merch. 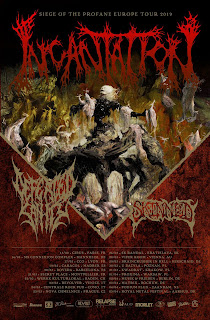 Watch Wings Of Virulence by Skinned

A bit less than one year after the release of their fifth album, "Shadow Syndicate" and the subsequent headlining Balkans tour of last Summer, Colorado-based Death Metal veterans SKINNED will be back in Europe, supporting INCANTATION alongside Germany's tech. Death Metal brutalers DEFEATED SANITY.