Neorhythm is streaming the song "Crystal Mountain" originally by Death from the album Symbolic released in 1995. The band features two members only known as Red One Red Two. 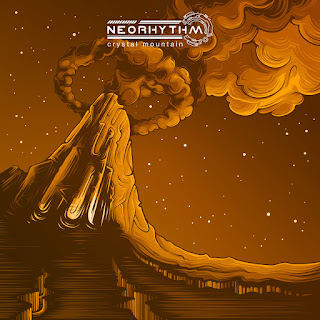 Listen to it HERE

NEORHYTHM offer what can only be described as Metal from Space. Creative in concept and aggressive in approach, you are cordially invited to take an interstellar journey that will prove impossible to forget.

Meteoric Thoughts was recorded and produced by NEORHYTHM. The EP was mixed/mastered at BlastbearSound. The artwork was created by Orm Embar.

Bio:
On a distant planet in the constellation E61,3 (which we call Neuw ourselves), two renegade traitors of interstellar spaces from the red subrace of Nameless decided to penetrate the Virgo Supercluster. It happened on the earthly calendar in the year 1703. For more than 300 years our spaceship plowed through the galaxy until it came across the Milky Way to the bright yellow dwarf G2V, which you call Sol. A strong stream of stellar wind carried us to the orbit of planet Earth, where as a result of a breakdown of one of the plasma engines we were forced to land in the geographic terrestrial region of Lapland, in a barren taiga. Since we needed help, we sent encrypted sound signals to all regions of the universe, as well as to the top leaders of the human Terra planet, to provide us with technological support. Our signals, converted into musical scales, were intercepted by the developed radio frequencies of earthlings, and you can now listen to them in the form that you call songs.

#heavymetal #music #promo #bands #artemorbid
Posted by Artemortifica at 7:40 AM