As Dystopia Beckons album released on Selfmadegod Records March 1st  2016. My initial thoughts are, this release offers a wide variety of death metal and does it in the most brutal way. Pure punishment is delivered from the opening track. Each song creates its own characteristics and keeps the listener engaged to the music.

The first songs "Rotting Domain" features (Sven Gross of Fleshcrawl)
"The Machine That Turns Humans Into Slop" featuring (David Ingram of Hail of Bullets, Echelon, ex-Benediction, ex-Bolt Thrower) they are the heavy hitters. Definitely rooted in the brutal death spectrum. Very powerful and destructive. "As The Last Day Has Passed", is a different track, more on the melodic end, thinking of bands like early In Flames or At The Gates, well executed and energetic. "Dead Rotting And Exposed", this song brings some grinding beats and harsh guttural vocals. Very intense in its delivery and dishes out a good amount of octane. "Steel Through Flesh Extravaganza", now this track resembles and early Fear Factory feeling in its introduction, then morphs into a Ministry type of blast beat. The closing and title track is menacing and haunting, like a sci fi horror film unleashing mech robots into a dark void. It sets a dark atmosphere and is much different than the other compositions.

Final thoughts, this album is powerful, its many facets and sounds keep things interesting. The brutality and force are always there no matter what other elements are mixed in. A solid performance is delivered and the metal underground fans will not be disappointed.
~Artemortifica 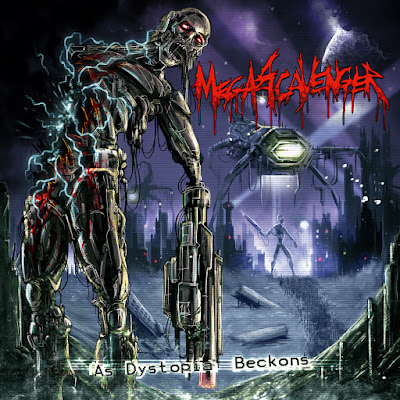 
2. THE MACHINE THAT TURNS HUMANS INTO SLOP (David Ingram of Hail of Bullets, Echelon, ex-Benediction, ex-Bolt Thrower)
3. DEAD CITY (Jocke Svensson of Entrails)
4. AS THE LAST DAY HAS PASSED (Teddy Möller of Loch Vostok, The Experiment No.Q, The Hidden)
5. THE HELL THAT IS THIS WORLD (Kam Lee of ex-Massacre, ex-Mantas, Bone Gnawer, The Grotesquery)
6. DEAD ROTTING AND EXPOSED (Brynjar Helgetun of Crypticus, Johansson & Speckmann, Just Before Dawn)
7. STEEL THROUGH FLESH EXTRAVAGANZA (Adrie Kloosterwaard of Sinister)
8. THE HARROWING OF HELL (Kam Lee ex-Massacre, ex-Mantas, Bone Gnawer, The Grotesquery) 9. AS DYSTOPIA BECKONS
Posted by Artemortifica at 6:49 PM